There are many well-known Greek poets. One of them is Andreas Embericos from the island of Andros.

His family are international ship owners and shipbuilders. He was born in Rumania on 20th August 1901 and died in Athens on 5th August 1975. He came to Athens as an infant. He worked in the London offices of his father’s shipping firm for a short period. However, he gave up his shipping career and lived in France between 1925 and 1931, where he studied psychoanalysis. He became a member of the surrealist group headed by Andre Breton, who published his ‘Manifestation for Surrealism’ in 1924. He returned to Greece in 1932 where he founded, along with others, a Greek psychoanalyst group. He became the first Greek surrealist poet.

Surrealism is based on techniques such as automatic writing, self-hallucination and the way reality is viewed and the free play of thought.

An example of one of his poems is ‘The Caryatids’. Only part of the poem is given below.

O the breasts of youth

O the pallid waters of the fig-peckers

The pavements resound with the steps of the morning people

O vigorous groves with your trees of crimson

Youth knows of your meaning

Already dawning upon your fringes

Tassels of eiderdown frisk among the breasts of young girls

Who walk half-naked in your little bypaths

Their hair is more beautiful than that of Absalom

Among the locks the drops of amber fall

And the dark-skinned girls come carrying leaves of ebony …. 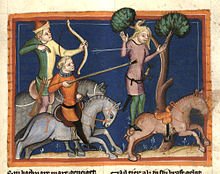 Picture of the death of Absalom hanging from the tree

by his hair. (14th-century German miniature)

Absalom: He was the third son of David, King of Israel. He grew up in Jerusalem where he was a great favourite, not only with his father, but also with the people. He lived in great style and was renowned for his abundant hair and handsome head. However, when he rose up against his father, this was the cause of his death as his hair was caught in the boughs of an oak tree as he was fleeing the scene.