August (Greek: Αύγουστος) is the eighth month of the year and the last month of summer. In the ancient Greek Attica calendar, it was divided into two periods – the Metageitnion (Greek: Μεταγειτνιών – mid July to mid August), and Boedromion (Greek: Βοηδρομιών – mid-August to mid September). The calendar basically set the dates for the religious festivals during that period. During the early Roman period the month was called Sextilis. With the use of the Julian calendar, it was renamed August in 8 B.C. in honour of Augustus Caesar, the founder of the Roman Empire. He was the first Roman Emperor and he ruled from 27 B.C. until his death in 14 A.D. 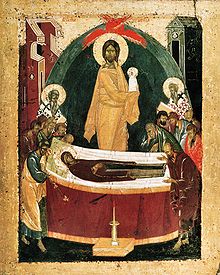 August is a very important month in Greece. Besides being a holiday month for the majority of people, it is also the summer Easter (Greek: Πάσχα του καλοκαιριού) as the Feast of the Dormition of the Theotokos is celebrated on 15th August. It is the falling asleep of the Virgin Mary, mother of Jesus Christ. It commemorates the Assumption of the body of the Theotokos (Greek: Θεοτόκος – God-bearer) into heaven. All the Apostles were at her bedside when she fell asleep except for Apostle Thomas. When he visited her tomb near the Garden of Gethsemane three days later, it was empty. The Lord Jesus Christ had carried her to heaven. 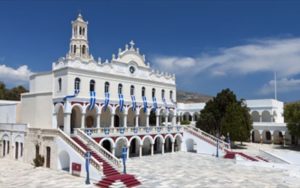 A period of fasting and special church services begin from 1st August, culminating in the Great Vespers service held on the evening before the feast. On 15th August the feast is celebrated with the Divine Liturgy of John Chrysostom in the morning. There are pilgrimages to various parts of Greece where there are churches in honour of Virgin Mary. One such place is the island of Tinos where legend has it that Virgin Mary appeared before a nun, St Pelagia on January 30, 1823, telling her where to find the icon of the Panagia that has healing powers. The Church of Panagia Megalohari (Greek: Παναγία η Μεγαλόχαρη) has been built on that spot. Many people with various health problems visit the church and pray to be healed. Miracles are said to have happened and people were made well again. Votive offerings (Greek: τάματα, tamata), to entreat a miracle of the Panaghia are given. The tamata can be anything from a simple candle to intricate silver or even gold carvings in representation of the miracle requested.

Panaghia (Greek: Παναγία) comes from pan + hagios, which means All-Holy or the Most Holy, one of the titles of Mary, mother of Jesus, used especially in the Orthodox Christianity. From Panaghia is derived the Greek given name of Panagiota (feminine) and Panagiotis (masculine). Both signify that the person is named in honour of Mary, mother of Jesus. Therefore, their names are celebrated along with those of Mary, Maria, Marios as well as Despina (Greek: Δέσποινα – Despoina).

Despoina means mistress. It is derived from des – potnia or lady of the house. It is used as a divine title. The masculine form is Despotes (Greek: Δεσπότης), which means master of the house. Virgin Mary is often referred to as Panaghia Despoina (Greek: Παναγία Δέσποινα – Our lady).

In ancient Greek mythology, Despina was the daughter of Demeter and Poseidon and sister of Arion, a divinely-bred, extremely swift immortal horse, which was endowed with speech. She was the goddess of mysteries of Arcadian cults who was worshipped under the title Despoina (the mistress), alongside her mother Demeter, goddess of agriculture and harvest, one of the central figures of the Eleusinian Mysteries. Demeter’s other daughter is Persephone by Zeus. Persephone was also called Kore.

The sanctuary of Lycosura, west of the town of Megalopolis is where Despoina was worshipped. There was a temple dedicated to Artemis, goddess of the hunt. An entrance to the sacred enclosure of Despoina was nearby. In front of the alter stood the goddess Demeter holding a torch in her right hand and her left hand was laid upon Despoina. Anytos was one of the Titans, who is said to have brought up Despoina.

In the National Archaeological Museum of Athens, the remains of the cult sculpture group can be found. It shows Artemis, Demeter, the veil of Despoina, Anytus and a Tritoness from the throne.