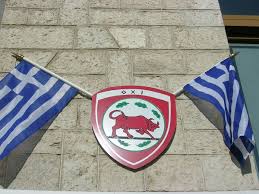 Each year, Greece celebrates ‘OXI’ Day, which commemorates the entry of Greece into the Second World War against the Axis powers, which were Germany, Italy and Bulgaria in Europe and Japan in Asia. It commemorates the rejection by the Prime Minister of Greece to the Italian demands that they be allowed to occupy certain ‘strategic’ areas of Greece. 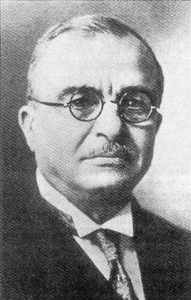 The decision was taken at 03:00 am on 28 October 1940, when the Italian Ambassador to Greece, visited Ioannis Metaxa, the Greek Prime Minister, giving him the ultimatum made by Bertino Mussolini, the Italian dictator. Metaxa replied in French, Alors, c’est la guerre, which translates into, Then it is war. It was quickly transmitted into a laconic ‘OXI’, meaning ‘NO’. Without any delay, the Italian troops that were stationed in Albania attacked the Greek army in Epirus at 05:00am. The ‘Epic of 1940’ had begun! It led to the first defeat of the Axis Powers. The Italians were driven out of Greece and in one of the most important battles that took place, Klisura Pass fell to the hands of the Greek army in January 1941. The attacks and counter-attacks took place from 28 October 1940 until 23 April 1941. 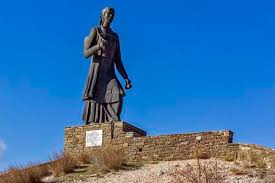 The women of Epirus played an important part in supplying the Greek army with food and munitions as the harsh winter and the steep terrain made it difficult for supplies to reach the battle front. The Monument to the Women of  Epirus can be seen outside the village of Zagori at a point 981 metres high on the Pindus Mountain range.

Despite the success of the Greek Army against the Italian Army, the Greek forces had to retreat in order to defend the Metaxa Defence Line in Macedonia, which had been built on the Bulgarian border to defend the northern areas of Greece. Hitler was forced to come to Mussolini’s aid as he saw that Greece was winning. The German and Bulgarian troops invaded Greece from that position on 6 April, 1941.The German forces entered Athens on 20 April, 1941. The NAZI occupation of Greece had begun. This turn of events would also influence the course and the outcome of the Second World War. It is said that if Greece had surrendered to the Italians, Hitler would have been able to invade Russia in the spring rather than in the winter. This change in plans led to his disastrous defeat. 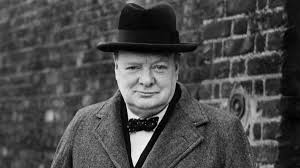 Winston Churchill, Prime Minister of Great Britain during the Second World War said of the Greek soldiers: Hence, we will not say that Greeks fights like heroes, but that heroes fight like Greeks.

of Greece. One such person is Sophia Vempo (Greek: Σοφία Βέμπο), the singer of victory. She was born in Gallipoli, Turkey, in 1910. The family moved to Greece after the Asia Minor catastrophe in 1922. The patriotic songs that she sang during the Greco-Italian war in the mountain area of Epirus raised the spirit of the Greek soldiers and encouraged them to fight against all odds. One of her most-loved songs was Youth of Greece Youth (Greek: Παιδιά της Ελλάδας Παιδιά). It was written by Mimi Triaforo, a very well-known composer at that time. It is one of the songs that is often heard while waiting for the military and student parade to start, which commemorates this annual celebration not only throughout Greece, but in all Greek communities around the world. When the German troops entered Athens, she was helped to escape to the Middle East where she continued to sing for the Greek troops that had been incorporated into the Allied contingents, encouraging them in their fight for freedom. She adopted the headscarf as was worn by the women in the villages as a token of their great sacrifice for the fight for freedom. 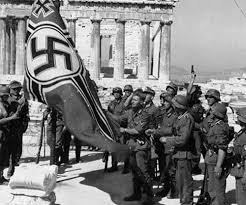 Another well-known person is M 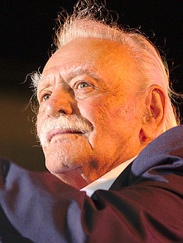 anolis Glezos from the island of Naxos. He was born in 1924. When the Germans entered Athens, they took down the Greek flag and raised their flag with the swastika. On March 30, 1941, Manolis Glezos and Apostolo Santos climbed onto the Acropolis and tore down the swastika. This action inspired the Greeks to resist the NAZI occupation. Manolis Glezos was arrested by the Germans, imprisoned and tortured. His life was one of resistance and fighting for the rights of the people. After the war he entered politics and was elected to parliament in 1951 with the United Democratic Left party. With the fall of the dictatorship of the Colonels in 1974, he was elected to parliament again with one of the Left Wing parties. He was later elected Mayor of Aperanthos, the capital of Naxos. In 2014, at the age of 91, he was elected to the European Parliament. He was the oldest person to hold such a position. He resigned in 2015. 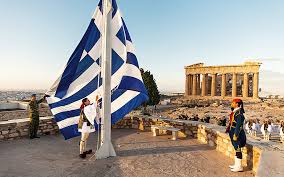 Greece was freed on 12 October, 1944. It can therefore be said that October is an important month for Greece as it celebrates not only her entry into the Second World War, but also her freedom with the defeat of the Axis powers and Hitler.