Greece has many Christmas traditions that often go back to antiquity. One such tradition is the decoration of the Christmas tree. Although decorating a Christmas tree was introduced by King Otto, the first king of Greece in 1833, the tradition already existed in ancient Greece. 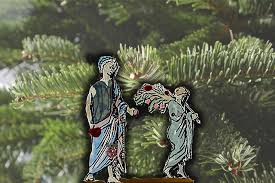 This was the tradition of the Eiresione (Greek: Ειρεσιώνη). ‘Εριον – erion’ means ‘wool’. An olive or laurel branch was wound with red and white wool from which hung the first autumn fruit and nuts (wfigs, almonds, walnuts, chestnuts, cereals, as well as containers of oil and honey, but not apples or pears) dedicated to the god Apollo, and born from house to house through the streets of Athens by children who had two living parents singing the ‘kalanda’ (Greek: κάλαντα). This took place on the seventh day of the Pyanopsia (Greek: Πυανόψια), which were celebrated between 22 September – 20 October. The children would be given offerings of nuts or sweets by the housewife. When they returned home, the Eirisione would be hung on the housedoor until the following year when it was burnt and a new one decorated.

It is said that this tradition began when Theseus, on his way to Crete to kill the Minotaur, stopped off at the island of Delos, where he sacrificed to the god Apollo. Besides being the god of healing, medicine, music, archery, poetry and the sun, Apollo was also the god of prophecy and his Oracle at Delphi was very important. Theseus vowed that if he won the fight against the Minotaur, he would offer decorated olive branches to show his appreciation to the god. On his return to Athens, Theseus carried out his promise and so established the feast of the Eiresione.

The carol that was sung was:

Eiresione for us brings figs and bread of the richest,

Brings us honey in pots and oil to rub off from the body,

Strong wine too in a beaker, that one may go to bed mellow. 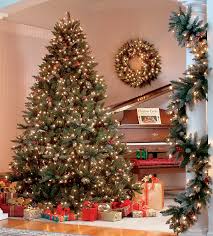 During the Byzantine period, this custom was considered as idolatry and was banned. However, as people travelled, it was slowly introduced to the northern parts of Europe. As these areas did not have olive trees, they began to decorate the trees that grew in their area, such as the fir tree. Centuries later, the custom returned to Greece. 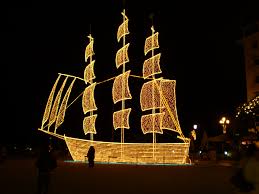 Besides the Christmas Tree, many coast and island areas decorate a sailing boat as Saint Nicholas is the patron saint of the festive season and the patron saint of sailors. The Christmas season in Greece begins on December 6, St Nicholas Day, and ends January 6, the Feast of the Epiphany. The boat symbolizes the new path that opens to mankind with the birth of Jesus.

Another aspect of a Greek Christmas is the food and especially the sweets. The main dish for Christmas dinner was and still is in many parts of Greece, pork. In many country areas, they still breed the pig that will be eaten at Christmas. It is slaughtered with great ceremony. Certain parts of the meat are kept and put in brine, others are made into sausages and the rest is baked for Christmas lunch. This tradition goes back to ancient Roman times as they used to eat a lot of pork. The actual word for pig in Greek is ‘gourounopoulo’ (Greek: γουρουνόπουλο), a compound word, which means ‘rolling in the mud’. Today, the Western tradition of turkey has also become a part of the traditional Christmas dinner.

In Roman times, the farmers and animal breeders would sacrifice pigs during the Saturnalia (Greek: Σατουρνάλια) a feast in honour of the ancient Greek god Cronus and the goddess of agriculture Demeter that was celebrated between 17 and 25 December. The purpose of the sacrifice was to make the ground fertile and blessed by the gods. The well-cooked pork was accompanied with vegetables especially prepared in brine.

The Christmas table is set out the night before Christmas with the best tablecloth on which the Christmas bread is placed along with a bowl of honey and a scattering of nuts around it, such as walnuts, almonds and hazelnuts. 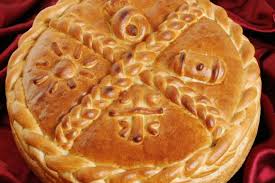 The ‘Christmas bread’ (Greek: Χριστόψωμο – Christopsomo) has different designs and decorations depending on the part of country. It is a round sweet bread flavoured with cinammon, orange and cloves and decorated with a cross on top. The bread is baked on Christmas Eve to be eaten on Christmas Day. Sweets such as kourambiethes, melomakarona, thiples, baklava and kataifi are also prepared for this festive season.

Below is a recipe for kourambiethes.

They should not be sticking on the paper when you try to lift them up. 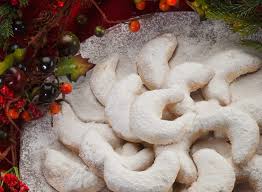