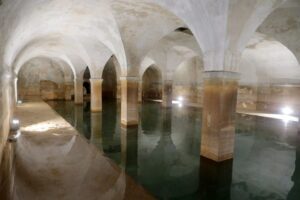 There are small oases is the city of Athens that even the locals are not aware off. One such area is the ‘Dexameni’ or ‘water tank’ in Kolonaki, an upper-class area of the city. However, few of us realize that ‘Dexameni’ was the reservoir that Emperor Hadrian built between 134-140 AD to help supply Athens with water. 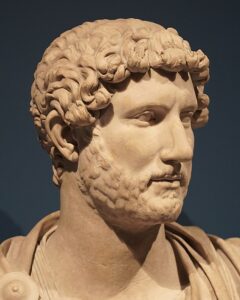 The water supply system that was constructed directed water from the springs around Athens and Mount Parnitha to a storage tank at the foot of Mt Lycabettus at an altitude of 136 meters. The aqueduct covered an underground area of 25 km. When it was completed, it was Athens’ largest infrastructure project up to that moment. Hadrian’s Reservoir sits at the western base of Mt. Lycabettus. It provided enough water to cover the needs of the area’s residents for over 1,000 years. The structure had a propylon (destroyed in the late 18th-century) with four Ionic columns and an architrave with a dedication to Hadrian and his successor Antoninus Pius, during whose reign the work was completed.

The interesting thing about Hadrian’s Reservoir is that it lies below the modern outdoor movie theatre called ‘Dexameni’. Those visiting the theatre on warm summer nights do not realize that they are sitting on top of a nearly 2,000-year-old reservoir.

The Roman aqueduct and reservoir operated without change until the time of the Turkish occupation, which began in 1458. From this point on, it was left to deteriorate. When the Turkish Army began to retreat from Athens after the Greek Revolution for Independence in 1821, many of the water supply works were destroyed. It was therefore necessary for immediate attention to be given to the water supply problem. Several projects were put under way, one of them being the ancient Hadrian aqueduct system. It was cleared of debris and put into operation again.

In 1870 a new reservoir was built in its place, increasing the storage capacity to 2.200 cubic meters of water. With the influx of refugees from Asia Minor in 1922, the water supply was again at a crucial level. Finally, in 1925 an American company by the name of ULEN was commissioned to renovate and increase the water supply capacity of the Hadrian aqueduct, as well as construct a new water supply system for the Athens and Piraeus area. This led to the construction of the Marathon Dam (1926-1929), solving the water problem once and for all.

Hadrian’s Reservoir is also connected with Epiphany Day or the Day of the Light (Greek: Θεοφάνεια, ton Photon) on January 6 annually. This day is an important part of the Greek Orthodox religious calendar as it is the day when Jesus Christ was baptized in the River Jordan by John the Baptist, thus the blessing of the waters. On this day, throughout Greece, the waters are blessed whether it is the sea, rivers, or lakes. On this day, the Reservoir is opened, and the cross is thrown into the water and blessed by the priest. Large viewing portals on the western walls offer a great view inside. 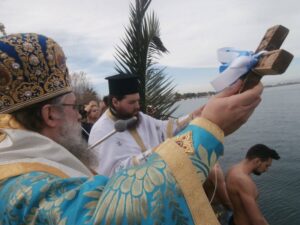 Besides sprinkling the people with the holy water with the use of the holy plant basil (Greek: βασιλικός), the homes are also sprinkled with holy water brought from the church to exorcise the kalikantzari – the small fairy-tale creatures that have supposedly pestered the people and caused all sorts of mischief during the Christmas period. They are sent back to Hades where they belong. Besides the people and houses, fields, vineyards, and household animals are also sprinkled with holy water to guard them against evil for the rest of the year. 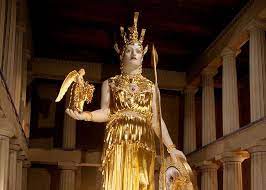 This custom of cleansing with holy water is also linked with the ancient Athenian ceremony of plynterion or washing of the statue of the goddess Athena, protector of Athens. The Praxiergidai, women of an Athenian family, removed the peplos (robe) and jewelry from the ancient wooden image of the goddess, which was then wrapped and carried in procession to the sea at Phaleron. In the evening, after it had been washed and dried by maidens, it was returned to the temple in a torchlight procession and was clothed with the clean peplos and adorned with her jewelry. In a similar way, the church icons are often washed before the Epiphany celebrations.