The month of March celebrated two very important events – that of International Woman’s Day on 8th March and the official beginning of the Greek War of Independence on 25th March. I therefore thought that I would refer to a famous Greek woman to honour both celebrations. The woman is Manto Mavrogenous (Greek: Μαντώ Μαυρογένους), daughter of a wealthy merchant from the island of Mykonos, but with business activities in Trieste, the city port in northeastern Italy on the Adriatic Sea where Manto was born in 1796.

Manto’s father, Nikolaos Mavrogenes, was a member of the Filiki Etairia or Society of Friends (Greek: Φιλική Εταιρεία), a secret organization that had been formed in the city of Odessa in 1814 by Nikolaos Skoufa, Emmanuil Xanthos and Athanasios Tsakalov with the aim of overthrowing Ottoman tyrany in Greece and establishing an independent Greek state.

Manto was a beautiful and well-educated person having studied ancient Greek philosophy and history and speaking French, Italian and Turkish fluently. She was influenced by the Age of Enlightenment and therefore when the struggle for independence began, she went to Mykonos, the island of her origin and invited the leaders of the island to help in freeing Greece from Ottoman rule.

She took an active part in the struggle for freedom. Using her wealth and influence, she equipped and manned ships that sailed around the Cycladic islands pursuing the pirates in the area. Also, on 22 October 1822, the Ottoman Turks were repulsed from landing on Mykonos. She equipped the men that took part in the campaign in the Peloponnese as well as taking part in the Siege of Tripolitsa (Greek: Άλωση της Τριπολιτσάς). Forces and financial help was sent to Samos when the Turks threatened the island. Her fleet and infantry took part in the battle for the island of Karystos in 1822. Despite funding a campaign to Chios, she could not prevent the slaughter that took place there. Men were sent to reinforce Nikitaras at the Battle of Dervenakia where Dramali Pasha’s forces were destroyed in July 1822. She returned again to the Cyclades and helped Tinos, selling her jewellery to equip 200 men as well as helping 2000 people that had survived the first siege at Messolonghi. Her men participated in the battles at Pelia, Phthiotis and Livadeia. 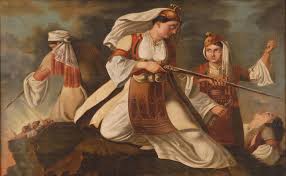 In order to raise money for the cause and to gain the support of the European aristocracy, Manto Mavrogenous sent the following letter to the women of Paris. ‘The Greeks, born to be liberal, will owe their independence only to themselves. So I don’t ask your intervention to force your compatriots to help us. But only to change the idea of sending help to our enemies. The war spreads the horrible death …’.

Manto moved to Nafplio in 1823 to be closer to the action taking place in the area. There she met Demetrius Ypsilanti. Their vision for a free Greece led to a romanctic relationship. 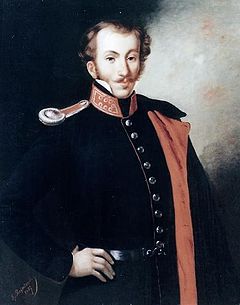 Demetrius Ypsilantis was born in Constantinople in 1793 and died in Nafplion in 1832 due to ill health. He came from a prominent Phanariot Greek family in Constantinople. He began his career as a dragoman of the Ottoman Empire and then served as an officer in the Imperial Russian Army where he distinguished himself in the 1814 campaign against Napolean Bonaparte. His brother was Alexander Ypsilantis, a leader of Filiki Etairia.

When the war ended, Ioannis Kapodistrias, the first Governor of an independent Greece, awarded Manto the title of Lieutanant General and granted her a dwelling in Nafplio as she had used all her wealth for the freeing of Greece and was living in poverty. She later moved to Paros in 1840 to be with her relatives where she died in 1848. Many squares and streets have been named after her to honour this brave woman who had given everything for the freedom of her country. She owned a sword with the inscription: ‘Δίκασον Κύριε τους αδικούντας με, τους πολεμούντας με, βασίλευε των Βασιλεύοτων’, which is translated to Lord, judge those who wrong me, who battle me, rule over King’. The sword is said to have come from Constantine the Great and Mavrogenous gave it to Kapodistrias. 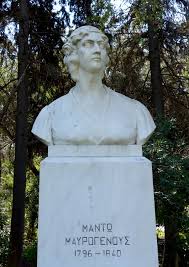 The story of her life was made into a film in 1971 starring Tzeni Karezi and Petro Fissoun. 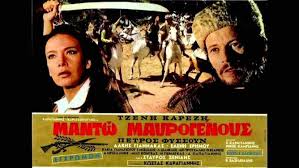