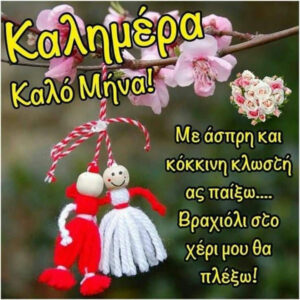 Greek tradition has it that you should say ‘Kalo myna’ (a ‘Good month’) at the beginning of each month. Along with this tradition, other traditions are followed as in the case of March.

Accordingly, from the 1st to 31st March in Greece, a ‘Martis’ or ‘March bracelet’ is worn. This bracelet is made out of red and white thread and is worn mostly by the children in order not to be burnt by the strong rays of the March sun after a long winter when the days were short and the sun’s rays were weak. This was especially important for the girls as being blackened by the sun was thought to be unladylike. Girls had to have white skin and rosy cheeks. A March saying is: ‘Oh precious daughter, may you never see the March sun’ (Greek: Ο πόχει κόρη ακριβή, το Μάρτη ο ήλιος μη την ιδεί). The colours of the thread (red and white) also symbolize chastity, purity and happiness. 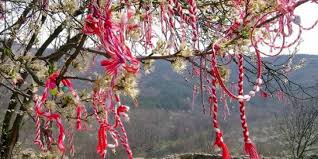 The bracelet is made on the last day of February and worn on the first day of March. It is removed at the end of the month and is often put on the rose bushes so that the first swallows can see it and use it to build their nests or in some areas the bracelets are hung on rose bushes so that they produce a lot of roses. In other areas, the bracelet is worn until Easter and is then tied around the Easter candle to be burnt. Another custom is winding the red and white threads around the clay water pitcher to protect the water from the sun and to keep it cool. Some people wear it on their big toe to prevent them from tripping.

This tradition of making bracelets out of red and white thread is said to have its roots in ancient Greece and more specifically in the Elefsinian Mysteries (Greek: Ελευσίνια Μυστήρια). The mystics or initiates would tie this thread, called ‘Kroky’ (Greek: Κρόκη) on their right hand and another piece of thread on their left ankle. This was to protect them against all harm and evil. This tradition continued throughout all periods and even spread to the Balkans when they became a part of the Byzantine Empire.

As March is the first month of spring when the weather is still very changeable, many nicknames have been given to it. Such names are: Springmonth (as it is the first month of Spring); Skin Scalper (Greek: Γδάρτης – as it can get so cold that it takes your skin of); Poleburner (Greek: Παλουκοκάφτης – as sometimes even the remaining wooden poles have to be burnt); Sower (Greek: Φυτευτής – as it is the month when the soil is prepared for the seasonal sowing of the land), and many more such names that refer to the characteristics of March. Most of these saying were created by the people to describe the sudden changes in the weather from warm to very cold and wet, which made things problematic, especially for the farmers and the animal herders. 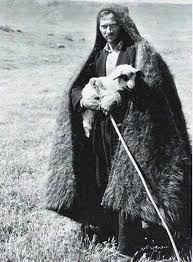 Save your wood for March so that you don’t burn your poles.

Shepherd save your cape for March.

Despite the problems that March weather brings, the farmers prefer March to be wet and cold rather than warm because this will help them have a good yield. The following saying is very well known in farming areas.

If it rains twice in March and once in April, the plowman who has sown a lot with be happy.