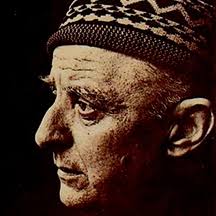 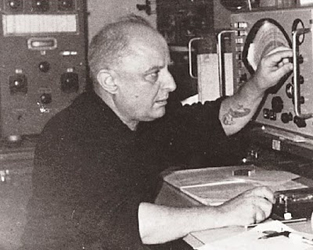 Nikos Kavvadias was born in January 1910 in Harbin, Manchuria, where his father, who had been living in Russia, had gone on business. His parents came from the Ionian island of Cefalonia, where they returned to for a few years when Nikos Kavvadias was seven years old. They moved to Pireaus in 1921. As he was not able to continue his studies at university because his father fell ill, he started work as a shipping clerk and later boarded a freight ship as a sailor. Although he wanted to become a captain, he eventually trained as a radio officer and received his diploma in 1939.

The experiences of the sea and the exotic ports he visited became the material for his poetry.

Many of his poems have been put to music by the composer Thanos Mikroutsikos. His work is characterised by a deep feeling of nostalgia. One of his well-known poems is Marabou, published in 1933 when Kavvadias was in his early twenties. It tells the story of a romantic young man impressed with the marvels of the world and the tragic love for a young wealthy girl he met on board ship and who later ended up as a poor prostitute that he again met accidentally at one of the ports. He recognised her from the cross that she wore around her neck. He had given it to her on their first meeting and she in return had given him a wallet.

They have been translated into English and are popular in many English-speaking countries.

He disembarked in November 1974 and died in Athens from a fatal stroke three months later in February 1975.

Below are a number of verses from his poem, Marabou.

Sailors I have bunked with say of me 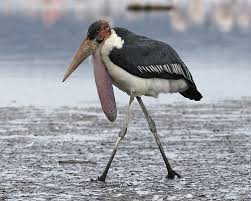 that I’m a thick-skinned roughneck, and depraved,

that I despise all women treacherously,

that never once have I shacked up with them.

that are crude myths and fabricated lies;

but that which cost me my deepest lethal wound

not one man knows: I’ve told no living soul!

For when at twilight tropic nights have fallen

and flocks of marabou fly toward the West,

something persistent goads me to write down

what has become my endless, secret wound.

Around her throat I hung a small gold cross

and she in turn gave me a handsome wallet;

on earth there was no sadder man than I

that day we reached her port of debarkation.

When in the pallid morning light I saw

her plain, she seemed so sad and cursed a creature

that with an awe most odd, as though with fear,

I hurriedly took my wallet out to pay her.

and stared with frightened eyes once on my purse,

once on my face, with horror. Then I, too, froze,

for round her throat I saw a small gold cross.

at a still marabou by the riverbank

that stubbornly stares at me. We’re both alike,

I think, in loneliness and stupidity. 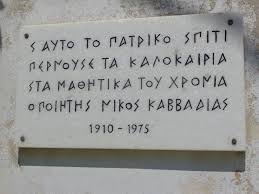 Nikos Kavvadia’s house still stands in the township of Fiskardo, 50kl north of Argostoli, the capital of Cefalonia.

A plaque has been placed on the front of the house. 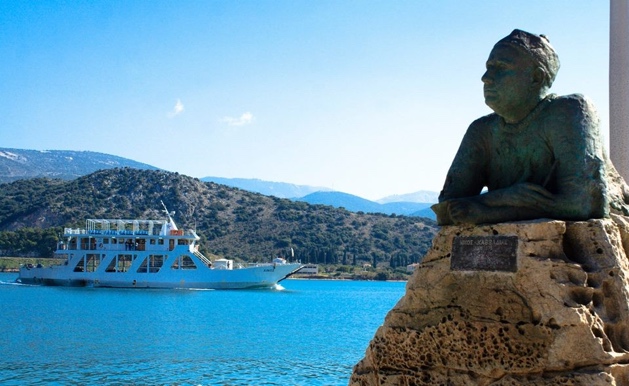 A statue of Nikos Kavvadias stands in a small square on the shoreline in Argostoli in his honour.