Fear is inherent in every person. It is a disturbing feeling that has a hold over a person because of an impending danger the courses of which we often do not know. We can all understand that behind a dark and rainy night, behind thunder and lightning and other unknown circumstances is hidden the ignorance as to what causes these things to happen. This ignorance is expressed in our fears.

If, for example, we had the knowledge of how natural phenomena such as thunder and lightning is caused and how this can be controlled and the danger minimised, then our fear will lessen. We will have the incentive to gain as much knowledge as possible as to the cause of our fear and make this beneficial for us. Our fears will safeguard us if handled properly. The more knowledge we have, the stronger and more liberated we are and the less we fear.

The ancient Greek gods often had helpers or companions in carrying out their acts. Phobos (Greek: Φόβος = Fear) was a mythological person, son of Ares god of War, and Aphrodite goddess of Love and Beauty. Phobos (Fear) with his twin brother Deimos (Terror) and his sister Enyo (Discord) would always accompany Ares on his war chariot. Phobos personified feelings of fear and panic in the battle field, while Deimos personified terror and a feeling of dread that would befall those in the midst of battle.

Phobos was shown with the head of a lion with a gaping mouth and sharp teeth, which brought about fear. Phobos was often depicted on the shields of heroes who worshipped him such as Hercules, Agamemnon and Archilles. Hesiod (Greek: Ησίοδος), writer of the poem Theogony, which describes the origins of the Greek gods, depicts Phobos on the shield of Heracles as ‘… staring backwards with eyes that glowed with fire. His mouth was full of teeth in a white row, fearful and daunting …’. Pausanias, an ancient Greek traveller, historian and geographer states, ‘On the shield of Agamemnon is Phobos, whose head is a lion’s …’. The two brothers, Phobos and Deimos were especially worshiped in Sparta as they symbolised the discipline and the cohesion that an army should have. The Spartans honoured fear as a positive force that held the state together. 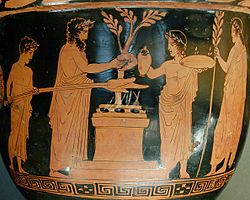 Phobos was the personification of terror. Alexander the Great before each battle would sacrifice to Phobos, probably asking for knowledge and help on the battle field. Alexander the Great relied on his knowledge of the enemy and the overall plan of the battle as well as the strength and weaknesses of his own army in order to overcome any adverse circumstance and not on ‘Lady Luck’, as we often tend to rely on.

According to Plutarch, the ancient Greek historian, Alexander the Great offered sacrifices to Phobos on the eve of the Battle of Gaugamela (Greek: Γαυγάμηλα), in the region of Iraq’s Kurdistan today. This decisive battle took place in October 331 BC when Alexander the Great invaded the Persian Archemenid Empire under Darrius III. The sacrifice to Phobos would follow a specific ritual so that the person would have favour with the gods. The ancient Greeks believed in ‘a present always for a present’ (Greek: ένα δώρο πάντα για ένα δώρο). This may have been the psychological warfare that he used against Darius III in order to install fear into his enemy. Darius fled the battleground of Gaugamela, making Alexander’s praying to Phobos seem successful as a tactic. This battle led to the fall of the Archemenid Empire.