Each month of the year is special. They mark the passing of the seasons, which in turn relate to certain celebrations and traditions that have a special meaning for each and every one of us. Therefore, the month of September highlights the end of summer and the beginning of autumn in the northern hemisphere. It is the beginning of the harvest period for grain crops and of course the picking of the grapes.

The naming of the calendar months has changed from antiquity up to now, but the customs and celebrations connected to each month has basically remained the same. In ancient Greece, the Attic calendar used by Athens and other city states, was based on the lunar cycle. It went from mid-summer to mid-summer. Therefore, the beginning of autumn was spread over two months: The Metageitnion (Greek: Μεταγείτιων) from mid-August to mid-September and the Boedromion (Greek: Βοηδρομιών) from mid-September to mid-October. The celebrations that were carried out during this period were connected with agriculture as it was the harvest period. The first crops were offered to the gods. 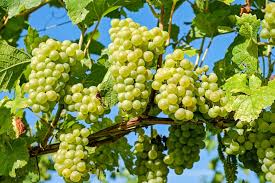 The harvesting of the grapes is connected with the god Dionysus, god of wine and merry-making. The word ‘ampelos’ (Greek: Άμπελος, αμπέλι) is used t 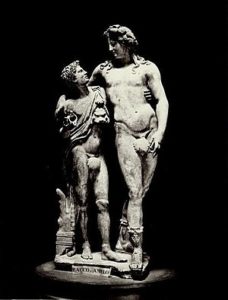 o refer to the vine yards. According to mythology, Ampelos was the son of a satyr and a nymph and favoured by Dionysus. When he died unexpectedly, Dionysus was very upset. He therefore transformed Ampelos’ body into the first grape vine and created wine from his blood. Another version of the death of Ampelos is that he was set among the stars as the constellation Vindemitor, better known as Bootes. Dionysus and Ampelos 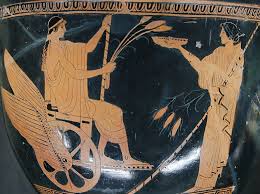 hone, who had been abducted by Hades (Greek; Άδης), god of the Underworld, she was given shelter by Celeus, king of Eleusis. She was given the task of looking after Celeus’ two sons: Demophon (Greek: Δήμοφων, killer of men) and Triptolemus (Greek: Τριπόλεμος, three-fold warrior). She taught Triptolemus the art of agriculture. He flew  across across the land on a chariot drawn by dragons teaching the people how to plant and reap crops. Demeter and Persephone helped him to complete his mission. Triptolemus was also associa 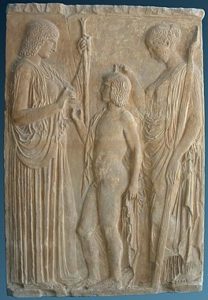 September, from the Latin ‘septem’ meaning ‘seven’, was originally the seventh month of the ten-month Roman calendar. When January and February were added, it became the ninth month. As September is the harvest month, it was the month when the annual taxes were paid. During the Byzantine period September 1st was the beginning of the Ecclesiastical as well as the Civil calendar period known as Indiction (Greek: Ινδίκτιου). Indiction means a recurring period of 15 years, often used as a unit for dating events. There are a number of important religious celebrations in September such as the birth of Virgin Mary on September 8th (Greek: Γέννηση της Θεοτόκου) and the Feast of the Cross on September 14, which commemorates t 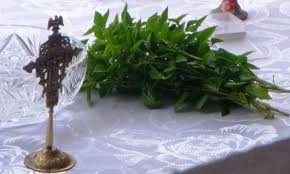 he cross used in the crucifixion of Jesus (Greek: Ύψωση του Τίμιου Σταυρού). The Holy Cross was discovered by Saint Helen at the spot where the basil bush was growing. This is why basil is used by the church when the priests bless the congregation.

Today, this tradition is continued in Greece at the beginning of the new school year when a priest goes to each school in order to bless the school, the teachers and the pupils (Greek: αγιασμός) for a successful school year. He dips a bouquet of basil (Greek: βασιλικός – royal plant) into the holy water together with the holy cross in order to bless all those present.