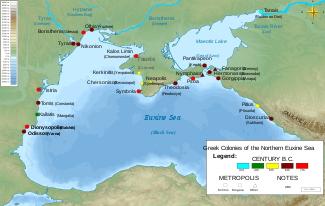 The Greek presence in the Black Sea and in the Ukraine goes back to the Classical period of ancient Greece. They were the first to colonize the shores of this area from the 6th century BC. At first, they referred to it as inhospitable or dangerous (Greek: Αξενο) as they did not know what they would meet outside their borders. The sea was rough – ‘Black’ – and the people around its shores uncivilized. However, the allure of the unknown and the exploration of a mysterious part of the world enticed them to overcome their fears. They set out with the hope of economic gain as in the myth of the  Argonauts and the Golden Fleece. 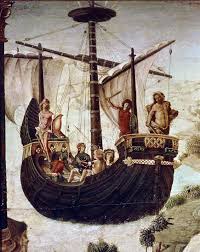 The demographic explosion of this period led to a demand for additional living and farming areas. The colonies were able to secure raw materials and create new markets for their city-states and established stopovers on the long-distance trade journeys of the era. Soon the area was referred to as ‘Efxinos Pontos’ (Greek: Εύξεινος Πόντος), which means ‘hospitable’. Approximately 90 colonies were established in the area, not only influencing the local people, but also becoming a bridge between East and West.

The citizens of Megara (Greek: Μέγαρα), an area in West Attica, were the first to colonize the shores of the Black Sea followed by the Ionian cities of Miletus, Phocaea and Teos. The names of many of these cities such as Bithynia, Chalcedonia, Byzantium, Istria, Sinope, Apollonia, Trebizond, Odessa, Mariopol, and many others are still used today.

Odessa had originally been established by the Greeks from Miletus. The Romans then took over followed by the Byzantines and then the Ottomans with the fall of Constantinople on 29 May 1453, a dark day for the Greeks that is still referred to today. Later, the Crimea Peninsula in which Odessa is located came under Russian rule after the Russo-Turkish War of 1792. The city was re-established by decree of the Russian Empress Catherine the Great in 1794. She invited the Greeks to return and use their agricultural skills to farm the large areas of land. Besides being important landowners, the Greeks were also very successful merchants, especially in the export of grains, the major product of the Ukraine from that period. Odessa soon became a major seaport and transport hub. It was often referred to as the ‘pearl of the Black Sea’. It became one of the most cosmopolitan towns of the Russian empire with a population of many ethnicities and with many languages spoken.

The other important aspect that ties Odessa (Greek: Οδησσός) with Greece is the fact that the secret organization for the freeing of Greece from Ottoman rule and creating a free and independent state was established there. Three merchants Nikolaos Skoufa, Athanasios Tsakalof and Emmanuil Xanthos founded the ‘Filiki Etairia’ (Greek: Φιλική Εταιρία), which means ‘Friendly Society’ in 1814. They met the war lords in Greece and set about organizing the Greek Revolution of 1821. 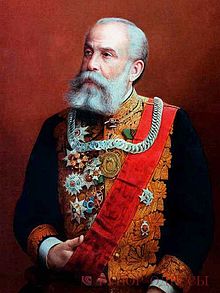 There were many important Greek benefactors from Odessa that helped not only the war effort, but also the new State once it was established. One such person was Grigorios Maraslis (Greek: Γρηγόριος Μαρασλής, 1831-1907). He was a statesman, collector, millionaire, philanthropist, secret adviser to the Tsar and honorary guardian of many societies. He became mayor of Odessa at the end of the 19th century and not only served the city for 17 years, but he also devoted his whole life to the service of the State and spent his own fortune for the development of the city. Some of his achievements during his term of office were the first tram line, the construction of the city theater, a gardening school, a medical complex, and many more. He also donated large sums of money for the building of a school as well as the Maraslean Teaching Centre of Primary Education in 1905 in Athens.

The other important city in Crimea is Mariopol (Greek: Μαριούπολη) in southeastern Ukraine on the coast of the Sea of Azov, which connects with the Black Sea by the narrow Strait of Kerch. Besides having being colonized by the ancient Greeks, large Greek populations fled to the area when the Ottomans started to conquer large parts of the Byzantine Empire. Greeks from as far away as the Peloponnese arrived there. More Greeks arrived in the early 1900s as Turkey began to persecute the Pontian Greeks living in the towns of the Turkish side of the Black Sea.

The Pontians settled not only in Mariopol, but in about 20 villages surrounding the city. They developed a unique cultural life with their customs and dietary habits. They built schools, a theatre, published books and newspapers. However, they spoke five different dialects which created a problem in communication with modern Greece. The Leventis Foundation of Greece has helped to establish modern Greek at the Mariopol University to overcome the language problem. It also established a library of over 30,000 volumes, the largest in Eastern Europe.

The name ‘Crimea’ is attributed to the Tartars when they invaded the region. The Crimean Peninsula was named Taurica or Tauris by the ancient Greeks. According to Greek mythology, the Tauri were the people to whom Iphigeneia was sent after the goddess Artemis rescued her from her father Agamemnon, who was about to sacrifice her to appease Artemis. There, the young woman became a priestess at the goddess’s temple.