The Greek island of Lemnos or Limnos (Greek: Λήμνος) is found in the northern part of the Aegean Sea opposite the Dardenelles, close to the island of Agios Efstratios and in the Prefecture of Lesvos. It is the eighth largest island. In order of size the islands are: Crete, Euboea, Lesbos, Rhodes, Chios, Cephalonia, Corfu and Lemnos.

So much can be written about the history of Lemnos from antiquity through to the Byzantine period and up to modern times. Besides the historical facts connected with Lemnos, mythology has also played an important part in forming the characteristics of the island. 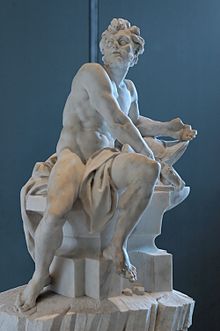 The island was the home of the god Hephaestus (Greek: Ήφαιστος), god of fire, metallurgy and technology. It is said that Zeus, his father, in a fit of rage, hurled him out of Mount Olympus. He was deformed and walked with a limp. His symbols were the hammer, anvil and tongs. 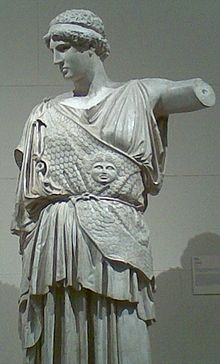 On Lemnos, he was cared by the Sinties (Greek: Σίντιες, meaning ‘destructive’ as they were pirates and raiders), a tribe that had come from the area of Thrace and settled on Lemnos. They took him to Therma, the hot springs with curative qualities that are just outside the city of Myrina in order for him to heal his cuts and bruises. He served as a blacksmith for the gods making their weapons and also making such items as Herme’s winged helmet and sandals, the Aegis breastplate for Athena, Aphrodite’s famed girdle, Achille’s armor and many more that are symbolic of their owners. He married the goddess Aphrodite.

Lemnos, from the dawn of human history in the Aegean, was on the crossroad of sea routes from the west to the coast of Asia Minor and the Euxine Pontus (Black Sea) in the east, regions rich in metal ores. Other names for the island are Aithaleia (Sooty), Amichtaloessa (smoke-shrouded) and Pyroessa (fiery) in reference to the activity of the volcano on Moschylos Hill. The smoke and flames that came from the crater filled the sky, darkening the sun and making the atmosphere hazy, thus the names that arose. Another common name, still used today, is Anemoessa (Greek: Ανεμόεσσα – ‘άνεμος’ meaning ‘windy’), because of the strong northerly winds that blow across the island all year round, and especially in August, the month of the meltemi (Greek: μελτέμι). The meltemi helps to cool the hot weather. 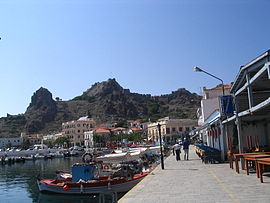 Myrina, the capital of Lemnos, was formerly known as Castro (Greek: Κάστρο – meaning ‘castle’ because of the Venetian castle built on the promontory that juts out to sea). It forms an ideal harbour not only for the local fishing boats, but for the yachts that visit the island as well as for the ships that link the island with Pireaus and Lavrio. Myrina (Greek: Μύρινα) was the queen of the Amazons and the wife of Thoas (son of the god Dionysus and Ariadne), who became the first king of Lemnos.

Myrina on the west coast and Poliochni on the east coast, were the two large proto-urban centres founded in the late fourth millennium BC, in the so-called Final Neolithic period. They were destroyed by earthquakes towards the end of the second millennium BC.

Excavations have been taking place for many years in both areas. The interesting thing about the settlement in Myrina on the side of the beach area called Romeiikos Yalos, is the fact that the houses were constructed in ‘neighbourhoods’, close to each other. They were made of two main rooms and a storage area with a small courtyard in front. They had a pitched roof of timber, seaweed and earth. In order to get from one house to the other, you literally had to go through a neighbour’s house. This helped in the bonding of the community. Also, once a week, each family had the task of cooking at the community kitchen for the whole community. As earthquakes were quite prevalent, when the houses were destroyed, they were rebuilt in another place close by. In this way, the settlement continued to expand. 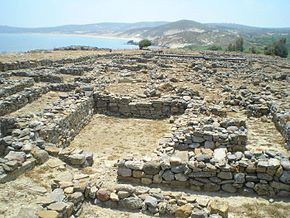 Poliochni, (Greek: Πολιόχνη) close to Moudros Bay, is considered to be the earliest organised settlement in Europe. The first settlement was built around 4,000 BC. There were four chronologically different settlements built one on top of the other. The last settlement is believed to have been destroyed in 2,100 BC. The metal items found on the site are proof that it was a major metallurgic centre. Another important feature of Poliochni is that it had the first democratic institution, the first ‘parliament’ (Greek: βουλευτήριο) not only in Ancient Greece, but in the whole area. Excavations in the settlement were begun by the Italian School of Archaeology in Athens in 1930.

Another interesting fact connected to Lemnos is the colony that was founded in Italy by Lemnian mercenaries and their families during the reign of Caesar when ancient Greece came under Roman rule. Approxiamately 500 families settled in the area naming their township Lemnos or Lenno as it is called today. Lenno is on the west end of Lake Como. Today, a sister-city relationship has been formed between Myrina and Lenno. One of the activities that is carried out between the two cities is the exchange of high school students so that they can visit the towns and learn about their history, culture and traditions.

As there is so much to be said about this island, I will continue with more information in a later blog.