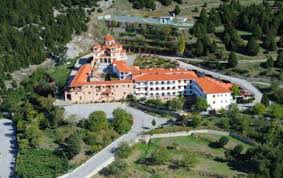 Greece is full of monasteries, some of which are very well known and very historical. Most of them date back to the Byzantium period. One such monastery is the Monastery of St Nicholas outside the village of Kaltezes (Greek: Μονή Αγίου Νικολάου Καλτεζών). It is only 30 km from Tripoli on the road to Kalamata. You can take the scenic route to the monastery, which passes through the village, along a road bordered with trees and beyond that a view of the mountain ranges covered in virgin forest. It’s a wonderful drive. 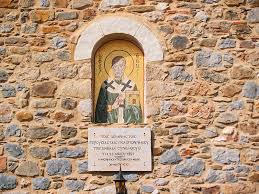 The story behind the building of the monastery is as follows. In 1696, in Smyrna, Asia Minor, there lived a young man named Elias Lyronis who was originally from Kaltezes. Saint Nicholas appeared three times in Elias’ dreams, telling him to return to Kaltezes and to dig among the ruins of an old monastery in order to find the icon of St Nicholas. Elias did as he was instructed and he found the holy icon, which has since been named Εύρεση (meaning ‘finding’).

Elias was ordained a monk and took the name Ananias. Ananias met many difficulties during the period when he was building the monastery. As Greece was still under Ottoman rule, the Turks would frequently plunder the monastery. One evening when a band of Turks, under the leadership of the local ‘aga’ (local commander or official) rode to the monastery, Ananias asked St Nicholas for help. Suddenly, a gust of wind rose and flames shot up in front of the Turks. The figure of the Saint appeared among the flames and ordered the Turks to leave the monastery. When the aga tried to attack Ananias, he found that he could not move. It was as though he was tied with chains. He pleaded with Ananias to set him free with the promise that he would not bother him again. Ananias did so and from that day forth he was left in peace to build the monastery. Ever since, the icon of St Nicholas is said to have performed many miracles when asked.

During the Ottoman Empire, the monastery was also used as a secret school where the children of the area learned to read and write Greek so that they would not forget their lan 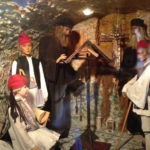 guage and customs. When the uprising for freedom began, the monks helped by organizing storage areas for the firearms as well as collecting food and money for the cause. During the fight for independence the Peloponnesian Senate also established the first Free Hellenic Governm 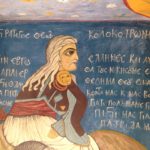 ent there on May 26, 1821. The Assembly of the Senate with forty representatives took place in the basement of a secret cell in the monastery. This cell was later converted into a church dedicated to Agios Karpos, whose feast is celebrated on May 26, the day of the First Assembly. In 1825, Ibrahim Pasha besieged and set fire to the monastery, destroying the north cells and all of the monastery’s documents.

After this catastrophe, the monastery fell into disuse until 1900 when the nun Magdalene revived it once more. She took the place of Ananias as she believed that with the help of God, the monastery would once again find its way. Between 1925 and 1932 a vocational school was established for the girls in the area where, besides learning how to read and write, they were also taught sewing, weaving and home economics. It was an innovative move for that period of time. At the moment, there are three nuns at the monastery; two of them are very old and the younger one had actually completed her studies as a doctor before deciding to enter the convent. She has written a series of books on the use of herbs and how these help to improve one’s health and combat illnesses.

The church is full of wall paintings of biblical scenes as well as icons of great value. Four portable icons of the 18th century come from Smyrna and they decorate the ‘templon’. They depict the Virgin and Child, Christ the Saviour, John the Baptist and Saint Nicholas. It is said that Elias Lyronis commissioned these icons in Smyrna. 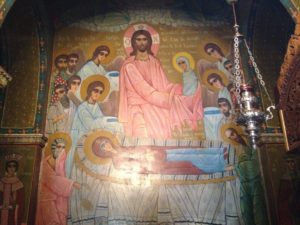 Restoration work has been in progress since 2006. However, the monastery is open daily and the nuns are able to show the visitors around and relate the history of the monastery and the role it played in the fight for independence. Such places are worth a visit not only from a religious point of view, but also from a historical one because they are connected closely with the history of Greece. In this way, it is easier to understand how the country has developed over the years and the difficulties it had to overcome.