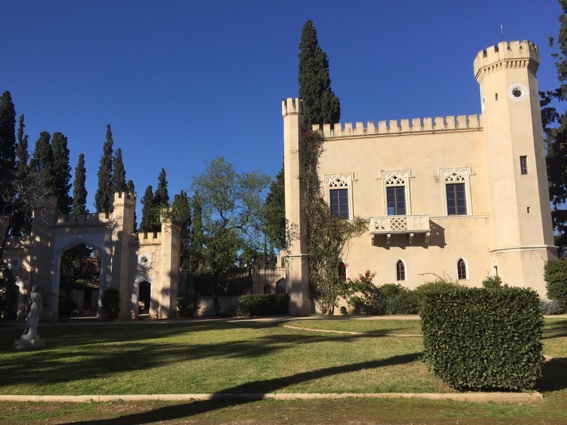 Tucked away in a quiet corner in the suburb of Ilion (Greek: ΄Ηλιον) in the west of Athens, a stone’s throw away from Syntagma Square is the former estate of Queen Amalia of Greece. In it is the neogothic castle that she had built along the lines of the Hochenschawangau castle in Bavaria where her husband, King Otto, was born so that she could rest when she visited her estate. It is known as Queen’s Tower as it had only one tower (Greek: Πύργος Βασιλίσσης). 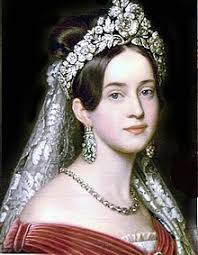 Amalia of Oldenburg became queen consort of Greece when she married King Otto in Oldenburg, Bavaria, on 22 November 1836. None of the court officials in Greece knew of the marriage until after the return of King Otto with his 18-year-old bride to Athens in 1837. Although she won the hearts of the Greeks with her refreshing beauty and her adoption of the Greek traditional dress that became known as Amalia (Greek: Αμαλία) as her formal court dress, her image suffered as she became more politically involved in the running of the country. The dissatisfaction expressed by the Greek people led to an assassination attempt in 1861. 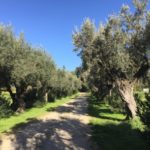 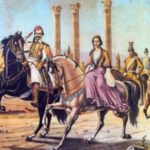 It can be said that Amalia had two loves: gardening and horse-riding. She was able to realise both of these dreams when the estate that was originally owned by two Englishmen, John Williams and George Myles was purchased by King Otto in 1848. She wanted to develop a model farm as an example for other farmers to follow with fruit trees, olive trees, a vineyard and animal husbandry. She also planted cypress trees and numerous palm trees as their trunk reminded her of the columns of the ancient Greek temples and the leaves the shape of a crown sitting on top of the head.

The estate has six natural hills, but Amalia ordered a seventh man-made hill to be built to replicate the seven hills that Constantinople and Old Rome stood on. She named these hills after the Argonauts from Greek mythology: Jason, Poludeukis, Kastor, Thiseus, Hercules, Horfeus and Pileus (Greek: Ιάσονας, Πολυδεύκης, Κάστορ, Θησέας, Ιρακλής, Ορφέυς). The tower-castle was built on the seventh hill, thus giving the name to the estate: Eftalofos (Greek: Ευτάλοφος – Seven Hills). 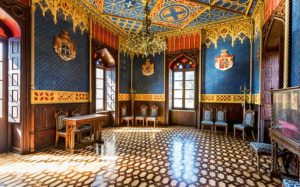 The Tower was built by the French architect Boulanger who had also built the Old Parliament House on Stadiou Street. It was inaugurated on 18 August 1854, the day of King Ludwig’s of Bavaria birthday. In doing this, Amalia wanted to honour her father-in-law. It has three levels: the entrance area on the ground floor from which a winding staircase takes you to the first level where a large banquet room is found with a small changing room off it for Queen Amalia to change and freshen up in.

The walls and ceilings feature the Coat of Arms of both King Otto and Queen Amalia. The Greek flag was added to the Coat of Arms of King Otto when he came to the throne of Greece. The colours that dominate are vivid blue, red and gold. The ceiling is painted in the Michelangelo style, giving a 3-D dimension. Visitors have to remove their shoes when they enter the banquet room on the first floor so as not to damage the well preserved wooden floor referred to as marquetry, which is a d 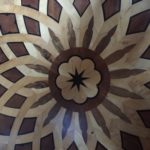 esign of different types of wood without any gaps in it. The original furn 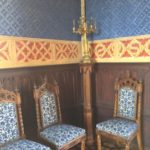 iture was burnt by the German occupation force during the Second World War, but has been replaced by period furniture of blue and white when the Tower was restored by the new owners. 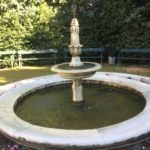 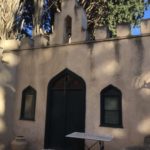 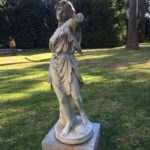 The entrance to the Tower is high enough for a horse and its rider to pass through. The tower never had a bathroom or a kitchen. They were housed in the buildings outside the Tower. A chapel was also built as Amalia was a Protestant.

The landscaped garden in front of the Tower has a fountain in the shape of a lotus. It was one of Amalia’s favourite flowers. A row of palm trees and a statue dating back to ancient Rome also decorate the garden.

When the royal couple were forced into exile in 1862, the estate was first bought by Baron Sinas and then by the politician, George Pachis. His two daughters, Eleni and Lavria, inherited the estate. It finally passed to the Serpieri family as Lavria had married into the family. However, according to a new law, the Serpieri family was forced to give a large part of the estate to the State, keeping the part that included the Tower. Today, white and red bio-wine is produced on the estate as well as a variety of herbs. The stables house horses that take part in horse shows. Guided tours of Queen’s Tower are provided at weekends.

King Otto and Queen Amalia after their exile returned to Bavaria and lived in Bamberg until their death. King Otto died in 1867 at the age of 52 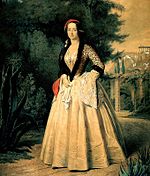 and Amalia died eight years later in 1875 at the age of 57. They continued to express their love for Greece by wearing the Greek dress and speaking Greek a couple of hours each day. Amalia’s dress consisted of a shirt with long sleeves to cover her pudgy hands, an embroidered dark blue or claret velvet vest and an ankle length skirt. A red cap with a golden tassel was worn on the head. 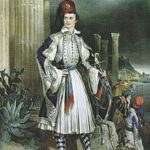 Otto’s dress was the Foustanella, a knee-length pleated skirt, with a white shirt, an embroidered vest and a red cap or fez with black silk tassel. Today this dress is the official dress worn by the Presidential Guard or Evzones that also stand guard at the Tomb of the Unknown Soldier in front of Parliament House on Syntagma Square.

They died without leaving an heir.