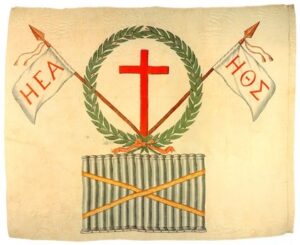 I swear in the name of truth and justice, before the Supreme Being, to guard, by sacrificing my own life, and suffering the hardest toils, the mystery, which shall be explained to me and that I shall respond with the truth whatever I am asked.

The flag was designed by Germanos III of Old Patras (1771-1826), the Orthodox Metropolitan of Patra. It has the symbols of the Filiki Eteria. The initials ‘Η ΕΑ’stand for ‘Freedom’, and ‘Η ΘΣ’ for ‘Death’. (Greek: Ελευθερία ή Θάνατος)

The day when the Greeks would take up arms against over 400 years of Ottoman rule was approaching. It was therefore necessary for an organization to be formed that would spread the word and organize the people. This need led to the founding of the Filiki Eteria (Greek: Φιλική Εταιρεία). ‘Filiki’ means ‘friendly’ and ‘Eteria’ means ‘Society, Company, Association’. This secret organisation was formed in 1814 in Odessa (Greek: Οδησσό) by Emmanuel Xantho, Nikolao Skoufa and Athanasios Tsakalof. The aim of the society was to prepare the people for the forthcoming revolt. The headquarters was in Odessa in the Ukraine, but the Society also spread to Constantinople, Smyrna as well as other parts of Asia Minor as far away as Cappadocia where there were large Greek communities. The Greek Revolution did not only involve the Greeks of mainland Greece and the Greek islands. It involved all the Greeks no matter where they were because they all wanted to help their country gain its freedom. The decision was finally taken that it should start from the Peloponnese, with a diversion in the Danubian Principalities at the same time.

The ‘Mother of the Filiki Eteria’ as she was referred to, was the wealthy and aristocratic Elizabeth Ypsilanti, mother of Alexandros Ypsilantis, who became the leader of the Filiki Eteria in April 1820. The meetings would take place in her home in Iaso, Moldavia. She did not try to stop any of her three sons from taking an active part in the secret organisation and in the revolution that followed for the freeing of Greece. The ideals of liberty and independence from Ottoman rule were higher than personal feelings. 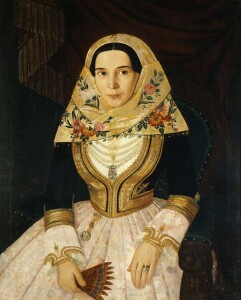 The Filiki Eteria would meet in private homes with only the male members present. Women were not included in this secret organisation. This changed when in Smirna, Kiriakoula Naphti found documents concerning the secret society in the drawer of her husband’s desk. She had been concerned about the meetings taking place in her house and thought that her husband, Michael Naphtis, had problems with the Turkish authorities. At that moment, her husband arrived and saw what she had done. As all the members of the secret society took an oath of secrecy, they had to be informed of what had taken place. This discovery could have cost her her life, but instead it was decided that Kiriakoula Naphti become a member of Filiki Eteria. She became the first woman member of the secret society in March 1820. 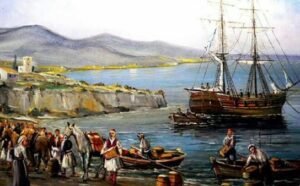 She began raising money for the cause as well as giving 3000 Turkish piasters of her own money, selling her jewellery and a large part of her property. All of this went towards the buying of ammunition and arms, something that was not easy to come by in Greece. Just before the beginning of the revolution a boatload of ammunition was sent from Smyrna to the port of Almirou in Verga in the Peloponnese area of Mani. From there it was transported to the monastery of Mardakiou (Greek: μοναστήρι Μαρδακίου) and distributed to the revolutionaries.

The family was in danger of Turkish retaliation for their actions and so they left Smyrna and settled on the island of Syros, the largest of the Cycladic islands. As Michael Naphtis was a doctor, he offered his services to the hospital in Ermoupolis, the capital of Syros. The hospital, which dates from 1823, helped treat those wounded in the various conflicts that were taking place at this period of time not only on the mainland, but in the islands as well. 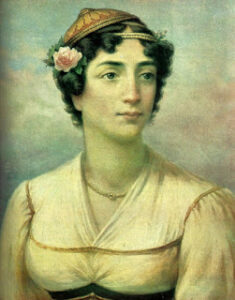 Another very rich and influential woman that became involved in the Filiki Eteria and the fight for independence was Manto Mavrogenous (Greek: Μαντώ Μαυρογένους, 1796-1848). She was born in Trieste and was the daughter of the rich merchant Nikolaos Mavrogenes. She was very well educated having studied ancient Greek philosophy and history and was fluent in French, Italian and Turkish. The family moved to the island of Paros in 1809 and from there to Mykonos where she became active in the fight for freedom. She spent her fortune in arming men for the various campaigns as well as putting together a fleet of six ships, which took part in the battle of Karystos and other naval battles. Her family did not sympathize with her actions and therefore did not support her even when she had lost all her fortune. She became engaged to Demetrius Ypsilanti, but unfortunately their relationship was not fulfilled as he died from the hardships of battle.

The legendary Laskarina Bouboulina was also directly involved with the Filiki Eteria. She was born in a Turkish prison in Constantinople when her mother Skevo visited her husband, who had been captured by the Turks because of his help towards the revolutionaries. She became the first woman sea captain, and with her war ship ‘Agamemnon’ led her men into the various naval battles and sieges such as that of Naflio. 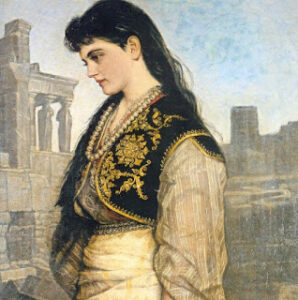 Marigo Zarafoupoulo from Constantinople became involved with the secret society from the beginning of 1821 and used her influence and wealth to help the sons of Petrobei Mavromichali, one of the revolutionary leaders, escape from a Turkish prison. She was later forced to leave and find refuge on the island of Hydra. She gave the large sums of money she had brought with her to the cause.

Efrosini Negri put her house in Constantinople at the disposal of the Filiki Eteria as well as hiding arms and documents that she would then pass on to the revolutionaries.

These are only a few of the women that were either directly or indirectly involved with the Filiki Eteria. Although most of them lost their wealth and some their lives, they put their love for their country and the fight for freedom above everything else. This is why such women are remembered and honoured today.